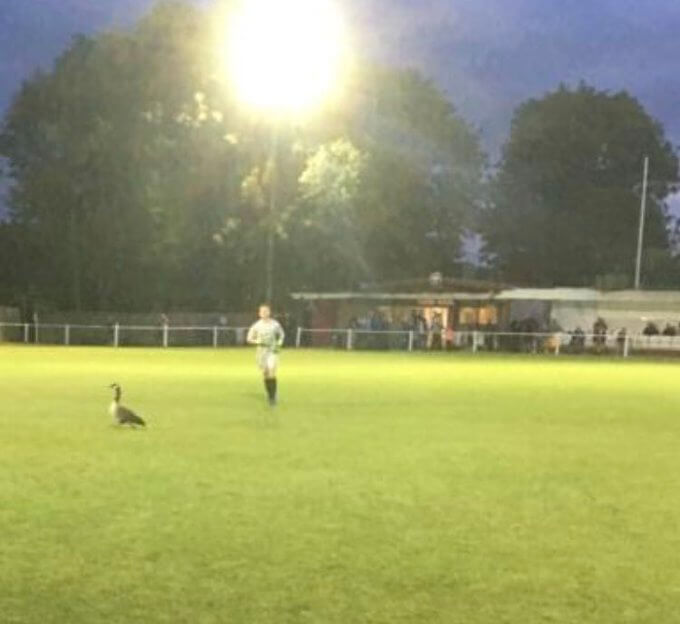 The first midweek fixtures brought about some of those long, tedious and tiring journeys (Someone needs to have words with that Fixture Secretary).

The balloon has finally burst as Harefield United suffered their first league defeat since losing 2-4 against Southall on 24 April 2018. The midweek fixtures brought about 63 goals (up by 15 on last season). Four Premier Division sides, Aylesbury Vale Dynamos, Colney Heath, Edgware Town and Wembley have 100% records while in Division One it is Ampthill Town, Shefford Town & Campton, St Panteleimon and Winslow United who can brag with 100% records (Brimsdown and London Lions could also be added to that list as they have both yet to start the new campaign).

The SSML Premier Division ‘new-boys’ took centre stage in midweek, all four new clubs recording wins, for three of whom it was the club’s first win in the SSML this campaign. Leading the way were Newport Pagnell Town who thumped Potton United 6-0 with Leon Lobjoit netting five times, for Potton United the early signs are it will be a long hard season having lost most of last season’s side to other clubs. Another successful club last season, Biggleswade United, have also seen much of their playing staff depart for pastures new and this was evident as they were soundly beaten 0-5 at home by Eynesbury Rovers, the visitors being tipped by many to be title favourites. Dunstable Town followed up their opening day defeat with a hard fought 2-1 success over Baldock Town at Creasey Park. Aylesbury Vale Dynamos made it two out of two as they defeated visiting Crawley Green 2-0. Harefield United (unbeaten in the league on route to last season’s Division One title) saw that long unbeaten run come to an end as they went down by the odd goal in three at Colney Heath. Big spending London Colney opened their campaign in midweek (having been the bye team on the opening day) however things did not go to the script as visiting Oxhey Jets returned home with the points following a 3-1 win. The come-back award went to Edgware Town in midweek as they overturned a 0-2 deficit to send visitors North Greenford United home pointless following four second half goals in the last eighteen minutes. Wembley are the early season table-toppers as they followed up their opening day win with a 3-1 home success over Harpenden Town, The remaining two of Tuesday night’s fixtures both finished even, Arlesey Town v Leighton Town ended 1-1 while the Leverstock Green v Broadfields United finished goalless. Full results and goalscorers are listed below.

“Beware of Greeks bearing gifts”, an adage Rayners Lane found to their cost as their first meeting with their hosts went horribly wrong resulting in a 1-7 defeat at the hands of the SSML Division One new-boys. However at Elmfields Gate Winslow United went one better to send visiting Milton Keynes Robins flying home following their 8-0 drubbing, the game also seeing Winslow United goalkeeper Sam Ashmead getting the first of the game with a direct free-kick from his own area. Buckingham Athletic enjoyed a solitary goal success at Amersham Town while it was also a 1-0 away win for Langford at Stotfold. Ampthill Town made the short trip to Bedford and returned home with the full quota of points following their 3-1 success. Tuesday night’s other action saw Enfield Borough and New Salamis contesting a 1-1 draw. The only SSML action on Wednesday saw Park View being held 2-2 at home by visiting Hillingdon Borough. Full results and goalscorers (where known) are listed below.

Two of last season’s SSML Premier Division sides, Cockfosters and Hadley, met in the Essex Senior League on Tuesday night at Chalk Lane and the hosts might have been forgiven in their thoughts that Christmas had come early when the game was halted as a goose had to be chased off the pitch.