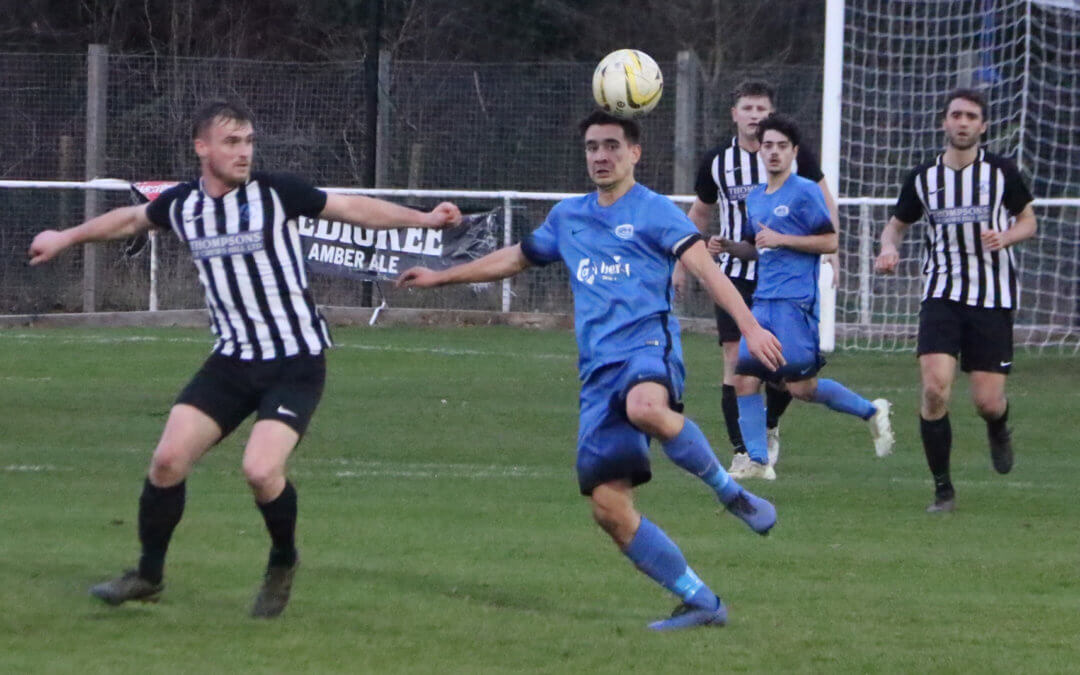 A ground hoppers delight of a double for me on Saturday, first up Potters Bar Town v Barnet in the lunchtime Emirates FA Cup game then refreshing myself with a steak pie and a cup of tea it was onto Newport Pagnell Town v Biggleswade United for part two …….. all this without leaving my comfy armchair thanks to live internet streaming. Below is what the Saturday SSML menu served up.

They may have left it late but Tring Athletic continue to set the pace at the top of the table following an 89th minute goal that was enough to see off visiting Dunstable Town. Newport Pagnell Town and unbeaten Colney Heath continue to hunt down the leaders, NPT coning out on top in a seven goal thriller with Biggleswade United while the Heath made it eight out of eight league wins with a 3-1 home success against Aylesbury Vale Dynamos. Edgware Town had to settle for one point after visiting Oxhey Jets struck twice in the last ten minutes to salvage a 2-2 draw. Crawley Green continue to impress, this time winning 4-1 at newly promoted Broadfields United. Arlesey Town went down to a solitary goal home defeat against neighbours Potton United, a game that saw Arlesey secretary Chris Sterry witnessing his first ever sin bin while life at the foot of the table continues to be hard for North Greenford United as they crashed 2-5 at home against Leighton Town. Wembley were held to a 1-1 draw at Vale Farm by visiting Eynesbury Rovers and London Colney and Baldock Town battled out a 0-0 draw at Cotlandswick. The day’s other game saw Leverstock Green winning by the odd goal in three at home against promoted Harefield United. Full results and goalscorers are listed below.

The final whistle sparked celebrations at Hillingdon Borough where the hosts recorded their first league win of the campaign defeating Amersham Town 3-2 to lift themselves off the bottom of the table. Brimsdown eased their relegation fears with a fine 2-1 home success against promotion chasing Stotfold. Winslow United move up to second place after grinding out a solitary goal win against visiting Enfield Borough, the margin could have been easier but for two missed penalties by the hosts. Ampthill Town’s trip to Bedfordshire rivals Langford resulted in a 1-4 defeat while London Lions suffered a 0-2 home defeat against league newbies New Salamis. Shefford Town & Campton drop to third after losing at relegated London Tigers by the odd goal in three while in the day’s other action FC Broxbourne Borough and Rayners Lane had to settle for a point apiece following a 3-3 draw. Full results and goalscorers (where known) are listed below.

Buckingham Athletic needed a penalty shoot-out to secure their passage into the Third Round of the Berks & Bucks Senior Trophy after being held 1-1 at Hellenic League side Long Crendon. Former SSML side and now members of the Hellenic League Risborough Rangers powered past New Bradwell St Peter 4-0 while the day’s other game saw Division One side Milton Keynes Robins FC winning 3-1 against Division Two side Buckingham United in an all SSML affair. Full results and goalscorers listed below.

Two Division Two Cup First Round matches played on Saturday and in both cases it was the drama of a penalty shoot-out to decide who would advance into the quarter-finals. Unite MK welcomed bottom of the table The 61FC (Luton) to The Irish Centre where the sides battled out a 2-2 draw the hosts thankful of a last gasp equalizer before they edged the shoot-out 3-1. It was to be a 3-3 draw between Berkhamsted Raiders and Aston Clinton with the Raiders winning the spot kick contest 4-2. Full results and goalscorers listed below.

It was a good day for the SSML in the Anagram Records Trophy with both our clubs recording fine victories, Sarratt hosting Middlesex County League table toppers and previously unbeaten London Samurai Rovers and winning 5-1 while Bovingdon travelled to Herts County League side Chipperfield Corinthians and returned home 3-1 winners. Full results and goalscorers (where known) listed below.

Picture it your team has set off for an away game when back at your home base two coachloads of supporters turn-up, well that’s what happened at Buckingham Athletic on Saturday. The Leamington & Warwick Coventry City FC Supporters Club contacted the Stratford Fields club earlier in the week, travelling the width & breadth of the country following their team the supporters prefer to pick out local working men’s clubs, or non-league football clubs on their way to their away games, and with The Sky Blues heading to the city on Saturday, Buckingham was an ideal location. A spokesman for the travelling fans said “We’d rather stop somewhere like this for two hours and put some much needed money behind the bar of a grassroots football club. We could go into town and find a high street franchise, but as football supporters we’d rather spend time at another football club, somewhere we haven’t been before & hopefully provide a boost of income for them”.

The Twittersphere came up with this delightful tweet from AFC Fylde and although not a SSML club it gets the honour of my Tweet of the Week.

80’ There’s a stoppage in play as a rather rotund man storms the field, topless, with a bouquet of flowers.

Remember to tune into Three Counties Radio (Herts, Beds & Bucks) and a show all about local non-league football- The show is live every Tuesday evening from 6.00pm – 7.00pm and is the perfect opportunity to catch up with our local non-league scene at all levels. This week regular presenter Ollie Bayliss is joined by Tring Athletic manager Kevin Christou.