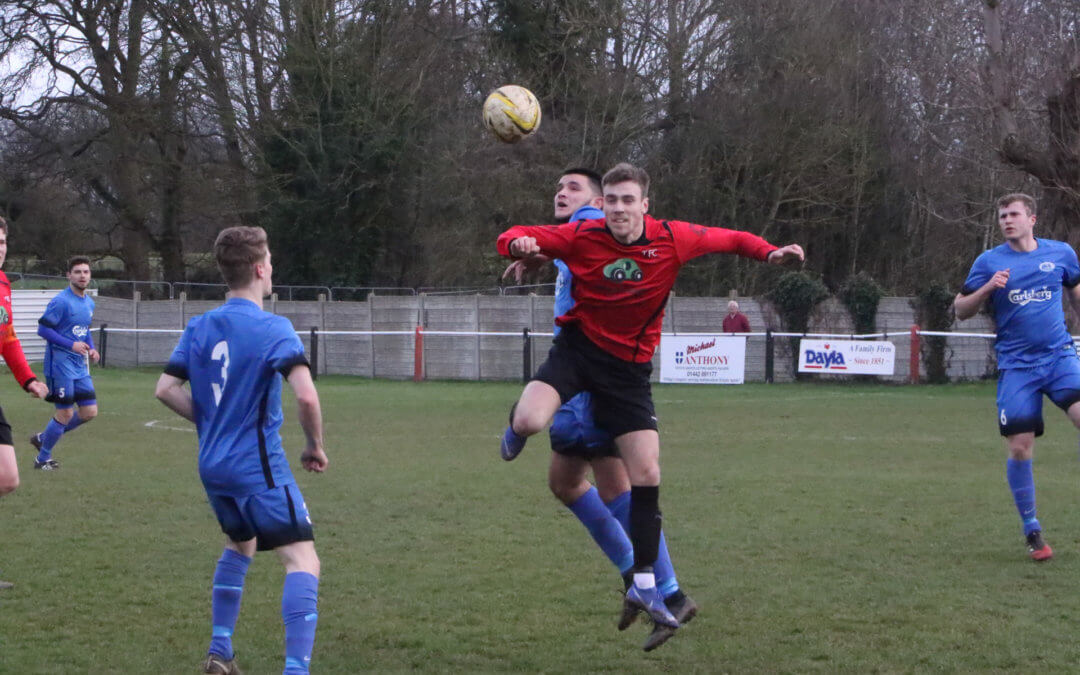 As the slight moisture in the air caused many postponements around the country the SSML proved they are made of sterner stuff to manage a full complete programme (one of the few leagues to achieve this), so a big shout-out to the groundsmen, groundswomen and volunteers for making this happen.

Division Two side Totternhoe failed in their giant-killing act in the League Challenge Trophy, the ‘Totts’ losing 0-3 at home to Premier Division Harefield United. Elsewhere in an all Division Two affair Codicote overcame hosts New Bradwell St Peter 2-0 to book their place in the Third Round. Full results and goalscorers listed below.

League leaders Tring Athletic were stunned by second from bottom Baldock Town on Saturday going down to a solitary goal defeat that ended a run of eleven straight league wins. Second placed Newport Pagnell Town failed to fully capitalize when they were held to a goalless draw at Oxhey Jets. Biggleswade United remain fourth as their 4-1 home success against Wembley moves them to within six points of the table toppers. Leighton Town recorded their biggest league win since putting seven past London Tigers on the final day of the 2016-17 season when they hammered London Colney 8-0, for the visitors it was a second heavy defeat this season having lost 1-7 to Crawley Green a month ago. Bottom club North Greenford United still await their first league win of the season following a 1-4 defeat at the fore-mentioned Crawley Green. Harpenden Town move up to fifth after they saw off Edgware Town 5-2 at Rothamsted Park. Leverstock Green won 1-0 at league new boys Eynesbury Rovers while Potton United went down at home by the odd goal in three to promoted Broadfields United. Elsewhere it was honours even as Aylesbury Vale Dynamos and Arlesey Town shared six goals, the game’s opening goal being scored by Arlesey Town goalkeeper Robbie Ponting’s long kick. Full results and goalscorers are listed below.

Table toppers St Panteleimon left in late to preserve their unbeaten league record on Saturday securing a 2-2 home draw with Ampthill Town, the result enabled chasing New Salamis and Winslow United to close the gap to thirteen points. New Salamis leapfrogging visiting Rayners Lane to go second thanks to a last minute winner while Winslow United enjoyed a 6-2 win at fellow promotion candidates Shefford Town & Campton. At the other end of the table Park View remain bottom following their 0-4 home defeat by London Lions while Hillingdon Borough suffered a 0-2 reversal at the hands of visiting London Tigers. Amersham Town moved out of the bottom two with their first win in five games, a 2-1 home success against Bedford. In the day’s other action Brimsdown were held 1-1 at home by Buckingham Athletic, Milton Keynes Robins won 3-0 at Langford and Stotfold recorded a 2-0 home win over FC Broxbourne Borough. Full results and goalscorers (where known) are listed below.

Old Bradwell United opened up a six point gap at the top of the table as with a sixth successive win in all competitions, leading goalscorer Darryl Smith was among those of the scoresheet as they triumphed 3-0 at Buckingham United. Pitstone & Ivinghoe move up into third spot following a 3-1 ‘derby’ win at Tring Corinthians AFC, the result lifting them above MK Gallacticos who were beaten by three goals at Bovingdon. Unite MK made it four games without defeat with a solid 3-1 success over Sarratt. The day’s other Division Two action saw Aston Clinton run out 3-0 winners at bottom of the table The 61FC (Luton). Full results and goalscorers (where known) listed below.

Mursley United’s trip to Galleywood (ProKit UK Essex Olympian Football League) resulted in a 0-2 defeat for the SSML side. Full result and goalscorers listed below.

Footballers beware, there is no escaping VAR.

Just ask Holstein Kiel midfielder Michael Eberwein, who is a contender for the unluckiest substitute in sport. Eberwein was warming up behind the goal during a German second division game against Bochum on Friday when he kicked a wayward shot back into play. However, VAR spotted Eberwein had touched the ball before it had crossed the line, prompting referee Timo Gerach to give a penalty and show him a yellow card. It is the sort of innocuous incident that may have passed the officials by in previous seasons, but the presence of the eagled-eye VAR cameras means nothing is now missed. International FA Board (Ifab) rules state if a substitute interferes with play, the referee can take appropriate disciplinary action and restart the game with a direct free-kick or penalty kick. Congo forward Silvere M’Boussy took advantage of the bizarre moment of fortune by converting the spot-kick to bring Bochum level. To make things worse for Eberwein, it is his only touch in a Holstein Kiel shirt since joining from Fortuna Cologne over the summer. He can at least take some consolation from the fact his side went on to win the game thanks to Janni Serra’s second-half strike. His experience sends out a message to players everywhere, though – VAR is watching you. Always.

The things we do for our football clubs.

As the rain descended the three topless (male) Basingstoke fans behind the goal in the first half provided most with a chuckle or two as they got thoroughly drenched.

Remember to tune into Three Counties Radio (Herts, Beds & Bucks) and a show all about local non-league football- The show is live every Tuesday evening from 6.00pm – 7.00pm and is the perfect opportunity to catch up with our local non-league scene at all levels. This week regular presenter Ollie Bayliss is joined by Chalfont St Peter manager Finlay Johnson.