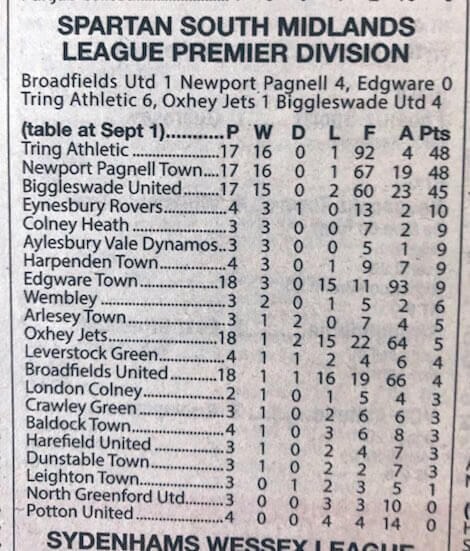 It was the turn of that other FA Competition, The Buildabase FA Vase, to take the spotlight at the weekend and for the competing clubs a more realistic chance to grace the hallowed Wembley turf. For two clubs, Park View and New Salamis, it was a first time entry in the competition.

The weekend brought about a goal fest with the 34 games producing 131 goals (an average of 3.85 per game). Winslow United topping the charts with 7, while Tring Athletic hit six. Ty Deacon (Winslow United) netting a hat-trick.

32 SSML sides began the weekend with Wembley ambitions and come Sunday evening 12 of those clubs were packing away the ‘new suits’ and hoping for better luck next season. There were 6 all SSML ties, while for Park View and New Salamis it was to be FA Vase football for the first time. Winslow United recorded their biggest FA Vase win with a 7-1 against Rushden & Higham United, this after going behind early. FC Broxbourne Borough were another side who enjoyed their best FA Vase result to date with a 3-0 win at home against Barkingside while London Lions suffered their heaviest FA Vase defeat when losing 0-4 at Colney Heath. We set the ‘Mad Scot’ Bill Hamilton loose at Berkeley Fields for the FA Vase clash between the unbeaten Division One leaders of both the Spartan South Midlands and United Counties Leagues. A cup tie that lived up to its billing. Three times St Panteleimon took the lead against Long Buckby, only to see the resilient visitors draw level on each occasion before having the temerity to turn the tables on their hosts with an 87th minute winner. The Saints captain Roberto Katsikas was perfectly positioned to turn in Courtney Massey’s cross to give his side an interval lead but the second half was hardly underway when Jim Smith hit the first of an impressive hat trick for the Northamptonshire side. It included a 77th minute penalty which resulted in the home team’s Nico Campbell sent off for handling the ball on the goal-line. Noyan Tajbakhsh scored twice for the Saints including finishing off an effort from teammate Michael Frangeskou which had rebounded off both goalposts and the goalkeeper. It looked as though it might be enough to live up to the club’s motto ‘Faith First’ but not this time with Long Buckby’s late winner avenging last season’s defeat by Saints in the very same round of the Vase. They are already Wembley bound … not to the Stadium but to the home of Wembley FC for a second cup battle with the Middlesex County side Cricklewood Wanderers. Excellent entertainment for the fans in a game of such fluctuating fortunes. Full results and goalscorers (where known) are listed below.

Three Premier Division fixtures due to the FA Vase and for Tring Athletic it was a stroll in the park on their travels as they thumped Edgware Town 6-0. Elsewhere it was 4-1 away victories for both Newport Pagnell Town and Biggleswade United against Broadfields United and Oxhey Jets respectively. Full results and goalscorers are listed below.

Berkhamsted Raiders maintained their 100% league record as they top the standings after a 2-1 win at Tring Corinthians AFC. Mursley United are now third following a 2-0 win at home against Totternhoe. New Bradwell St Peter enjoyed a 3-0 success at Pitstone & Ivinghoe while the day’s other fixture saw Sarratt and The 61FC (Luton) share the four goals when they met in Hertfordshire. Full results and goalscorers listed below.

Tweet of the weekend has to go to Winslow United for this delightful gem.

“Goal 7-1! No clue who scored as yet again I’m looking for footballs. Rest of the committee must be busy”.

Remember to tune into Three Counties Radio (Herts, Beds & Bucks) and a show all about local non-league football- The show is live every Tuesday evening from 6.00pm – 7.00pm and is the perfect opportunity to catch up with our local non-league scene at all levels. This week regular presenter Ollie Bayliss is joined by Lee Rushbridge, former player with Baldock Town and now secretary at Biggleswade FC.