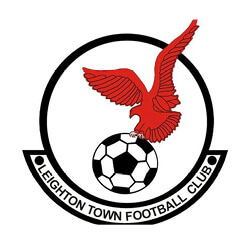 Leighton Town’s tactics paid off big time against their Western League opponents at Bradford Upon Avon on Saturday. Playing with one up, packing the midfield and playing on the break, Leighton started well and within the first 2 minutes were causing problems for the home defence. So it was no surprise when following a clearance from a corner in the 15th minute, the Leighton centre half hit a curling shot from the edge of the penalty area into the right hand corner of the net. Following a great one handed save from the Leighton keeper on 26, they went further ahead on 29 when from a quick break and forward interplay, the Leighton 10 calmly put the ball into the net from close range.

Another great save by the away keeper on 34, kept the 2 goal cushion intact, but right on half-time the home side pulled one back, setting the scene for a nervous and testing second half. The home side’s tactics seemed to be almost entirely via the aerial route which was surprising as they are top of their League. This played to the strengths of the visitors who although having limited possession, were content to keep playing on the break. The Home team’s frustration showed with yellow cards for their captain and another defender on 66 and 70. As the home team continued to push players forward, gaps grew larger, and Leighton’s excellent day was rewarded with another breakaway goal on 88. At this point the home supporters knew the game was up and started to leave the ground.

Although not playing that well, Leighton did enough to win fairly comfortably and loook forward to a quarter final.